Ear, nose and throat disorders represent a large proportion of health care problems in children. These problems are usually treated at first by pediatricians or family practitioners. However, when the problem fails to resolve, becomes more severe, or is a complex problem with a recognized need for a specialist’s attention, the child is referred to an Otolaryngologist, a physician who has specialized training in the medical and surgical management of ear, nose, and throat problems. All the physicians at Piedmont Ear, Nose and Throat Associates treat pediatric patients.

Children experience the same ear, nose and throat problems as adults do. Highlighted in this web page are descriptions of the most common pediatric ear, nose, and throat disorders and medical or surgical management of these problems.

The most common pediatric disease seen by an otolaryngologist is persistent or recurrent ear infections (otitis media). Otitis media can be serious because the infection in the ear can spread to nearby structures in the head. It also is the most common cause of hearing loss in children. Hearing loss, especially in children, may impair learning capacity and even delay speech development. If treated promptly and effectively, a child’s hearing can almost always be restored to normal. In addition, the pain associated with an ear infection can be severe causing extreme discomfort for the child.

Otitis media is caused by the accumulation of infected fluid (pus and mucus) behind the ear drum. The build up of pressurized pus in the middle ear causes earache, swelling, and redness. Sometimes the eardrum ruptures, and pus drains out of the ear. More commonly, the pus and mucus remain in the middle ear because it cannot drain due to a blockage of the eustachian tube (a tube that leads from the middle ear to the back of the nose). Even after the infection has cleared, fluid remains in the middle ear for long periods of time (serous otitis media). This condition makes the child subject to frequent recurrences of infection. Since the eardrum cannot vibrate properly, the child may experience hearing problems.

Otitis media and serous otitis media normally respond well to antibiotics and/or antihistamines/decongestants. In some cases, however, further treatment may be recommended by your physician. This treatment may be the surgical placement of a ventilation tube in the eardrum. This “tube” allows fluid to drain from behind the eardrum preventing fluid accumulation and thus improving hearing. Tubes generally stay in the eardrum from 8 to 18 months and “fall out” on their own. The tube cannot be felt in the eardrum. The child will probably notice a remarkable improvement in hearing and decrease in the frequency of ear infections.

Infection and Enlargement of Tonsils and Adenoids 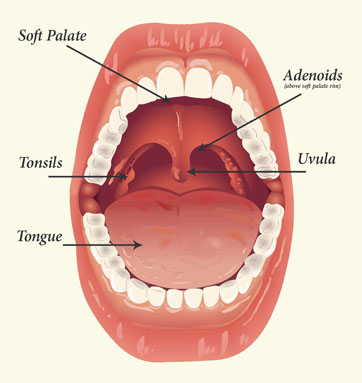 Tonsils and adenoids are lumps of tissue that are similar to the lymph nodes or ‘glands’ found in the neck, groin, and armpits. Tonsils are the two ‘lumps’ on the sides of the throat. Adenoids are high in the throat behind the nose and the roof of the mouth (soft palate) and are not visible through the mouth without special instruments.

The most common problems affecting the tonsils and adenoids are recurrent infections and significant enlargement or obstruction that causes breathing and swallowing problems.

Bacterial infections of the tonsils, especially those caused by streptococcus (strep throat), are first treated with antibiotics. Sometimes, removal of the tonsils and/or adenoids may be recommended. The two primary reasons for tonsil and/or adenoid removal are (1) recurrent infection despite antibiotic therapy and (2) difficulty breathing due to enlarged tonsils and/or adenoids. In addition, recent studies indicate an adenoidectomy may be beneficial treatment for some children with chronic earaches accompanied by fluid in the middle ear.

Nosebleeds are a condition commonly seen in children. Most cases resolve spontaneously and represent nothing more than a nuisance to the parent and child. Sometimes it becomes persistent and may require specific treatment. Rarely, it may be the presenting symptom of a serious local or generalized disease.

Nosebleeds are often the result of extremely dry nasal linings which lose the protective layer of mucus. This results in fragile tissue which has a tendency to bleed following the slightest trauma. Nosebleeds are most common during the winter months because of the increased incidence of colds leading to swollen nasal tissues with enlarged blood vessels. Central heating during the winter months dries the nasal linings.

When a nosebleed occurs, help the child to remain calm. Then: 1. Pinch all the soft parts of the nose together between your thumb and the side of your index finger or soak a cotton ball with Afrin, Neo-Synephrine, or Dura-Vent spray and place this into the nostril. 2. Press firmly but gently with your thumb and the side of your index finger toward the face, compressing the pinched parts of the nose against the bones of the face. 3. Hold that position for a full five minutes by the clock. 4. Keep the head higher than the level of the heart. Sit up or lie back a little with the head elevated. 5. Apply ice “crushed in a plastic bag or washcloth” to nose and cheeks.

More severe cases with frequent bleeding and significant blood loss may require more aggressive treatment. A chemical cauterization (burning) of the enlarged blood vessels using a silver nitrate stick can be performed in the doctor’s office. If bleeding recurs after an attempt at local cautery, more aggressive measures may be required including electrical cautery or surgery to tie off the bleeding blood vessel is possible. Surgical intervention is extremely rare in children.